Chase Johnson will never forget the advice of one high-school teacher:

“If you don’t go to college, you’ll never be successful.”

The teacher may have had good intentions. On the whole, a four-year college degree is necessary for many career paths and a natural stepping-stone after high school. In fact, the Ariens Foundation provides scholarships to many students each year to attend college, particularly those pursuing STEM-based careers.

But for Johnson, the advice was fuel for a fire. He didn’t want to attend a four-year degree program, and he became determined to define success on his own terms. Now at age 19, he’s already proving that with determination, discipline and a fierce independent streak, success is possible outside of the traditional college route.

“If you don’t want to go to college, there is still a life out there for you,” Johnson said. “You have to grind and work hard. It’s not easy, but you can still make a good living and work for yourself.”

Johnson is the owner of Chase’s Yard Care and Landscaping and Deep Roots Nursery, both based in Mont Belvieu, Texas. It’s a booming city that has been experiencing incredible population and economic growth for decades, thanks to its ever-growing energy sector. Less than 30 miles from Houston, Mont Belvieu is located near several petroleum and chemical plants, all run by the world’s biggest energy companies, many of them household names.

“Most of the people that live here work at the energy plants, and they are good jobs so they’re making really good money,” Johnson said. “They have big houses with big yards, and these are our main customers. We also do commercial cutting with our Gravely mowers for almost a dozen of the largest plants and companies around.”

The local schools primarily suggest that the youth of Mount Belvieu attend four-year colleges and take up jobs in the regional energy sector, Johnson says. While he acknowledges that this is a good path for many students, he also realizes that many of them are graduating with student loan debt and waiting four or five years to begin their careers. Meanwhile, many vocational and trade jobs that pay very well and offer excellent benefits are going unfilled. 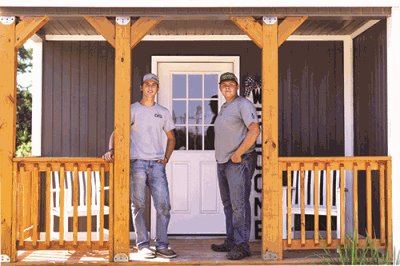 “If you look at the trades, they’re really low on people,” he said. “There is a need for electricians, plumbers, HVAC specialists and landscapers.”

Johnson has been moving to the beat of a different drum since he was a kid. His parents taught him from a young age that if he wanted something, he had to work hard for it. At age 10, a neighbor gave him a broken lawnmower, which he and his father repaired. Johnson began doing odd jobs and mowing lawns for his other neighbors so that he could earn his own money.

By age 12, he was booked doing odd jobs for an entire week. These were tasks like weeding flower beds and cleaning gutters. When he needed a trailer to haul his lawnmower, he learned how to weld so he could build his own.