For the first time in the company’s history, AriensCo is selling its industry-leading lawn mowers in China. Long
considered one of the toughest markets to gain a foothold, China has a growing marketplace and is full of
opportunity. AriensCo manufactures and sells its “Countax” brand of lawn and garden equipment in the U.K. and Europe, and it’s these mowers that will soon appear in China. This equipment has a reputation for high-end
quality and a unique feature set that enables it to cut and collect grass in almost all conditions.

Shanghai Chimao Garden Company (SCG Company) is the new AriensCo dealer for China. Like most
companies in China, SCG Company was incorporated and established incredibly quickly. In just one year,
it has built a distribution business that already boasts major franchises and an extensive dealer network that
rivals all but the largest international brands. In April, SCG Company launched sales of Countax equipment
in China at the Shanghai New International Expo Centre.

Oliver Chen, managing director of SCG Company, said Countax’s performance and reliability is what attracted the lawn and garden distributor to the brand. Chen has extensive industry experience, working for other major global businesses before founding his own business in 2018 alongside Tom Zhang and Rock Liu. 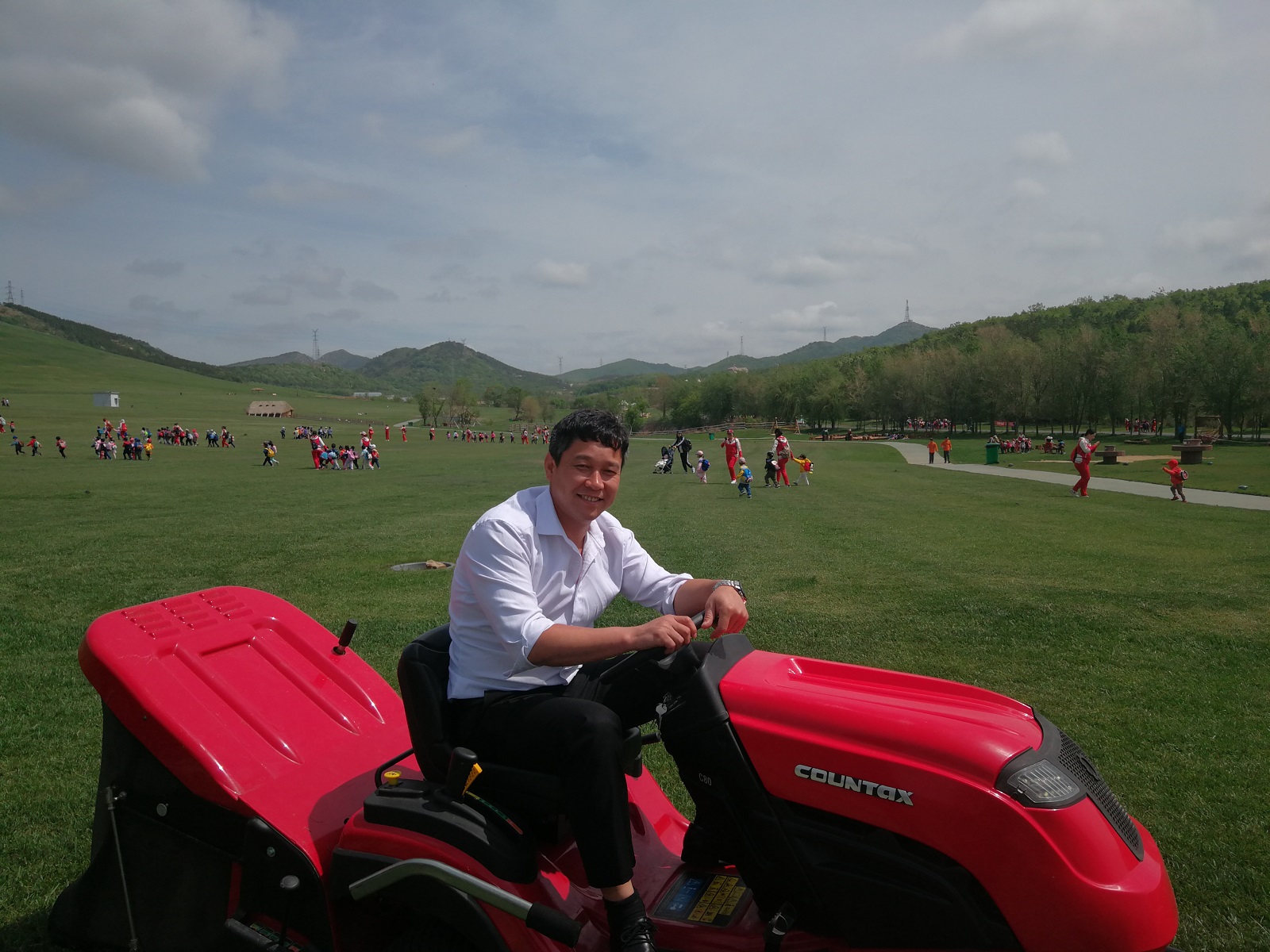 “This was the first time a Countax tractor had been displayed in China,” Chen said. “We were amazed by the
attention it received. For the weeks leading up to the show, we had been promoting Countax on WeChat (a
Chinese social media platform). On the opening day in Shanghai, we found that customers had traveled
from all over China to come and see this tractor.”

Shanghai is almost 100 kilometers wide and has a population greater than 24 million. Although there are few private gardens, there are many public green spaces that need regular cutting. Despite a tendency towards high-rise living, China's citizens appreciate and covet green space. Parks and public gardens are
incredibly popular, bursting with people wanting to escape the city noise and pollution.

“The garden machinery market in China is very different than that of U.S. or Europe,” Chen said. “Here, there is almost no residential market for lawn mowers. This is because the majority of Chinese people live in apartments within a major city. Those who do own a house with a garden are certainly not the ones who will be mowing the lawn."

The biggest difference between the Western and the Chinese garden machinery markets remains the choice of equipment. In China, commercial cutting is mostly carried out by small, independent contractors. With a total population of 1.4 billion people, there is almost always someone else who is willing to do a job faster and for less cost.

The old business model in China was to purchase inexpensive domestic lawn mowers, working them beyond
their design life and sending them to the landfill once they break. One dealer reported selling thousands of ride-on mowers a year (the type usually sold at discount big box stores) to commercial customers only.

But as the market has grown, there has been a change in the thinking from both the contractor and the dealer. Demand for quality and reliability is driving interest in Countax. “Durability is everything in the Chinese market,” Chen said. “Landscapers will run products very hard, and Countax has passed all of our tests for reliability in these difficult conditions.”

Chen’s management team is small but impressive. Zhang, seemingly the most respected salesman in the Chinese lawn and garden industry, drives dealer business alongside Chen. At the Shanghai show, it was apparent that Zhang seemed to know every dealer and landscape contractor in China, as dozens of
people were drawn to the booth to simply shake his hand.

Chinese culture is built on the concept of “guanxi” — the system of social networks and influential relationships
that facilitates business, which is possibly the most misunderstood system in the West. Despite being known for their ability to work fast, incredibly hard and with tough negotiation, the market is largely built upon long-term  relationships. If a salesman changes companies, so do his customers. They remain very loyal to their friends and colleagues, a concept Zhang understands very well. Since joining Chen to form SCG Company, Zhang has delivered a near instant dealer network and customer base because of his established reputation within the industry.

“The secret to success in the Chinese market is relationships,” Zhang said. “This is why it can be difficult for
Western companies to enter the market. People buy from people, and established relationships built on
trust and integrity is a necessity for building a new brand.”

Liu is the third piece of the management team. As the technical manager, Liu has extensive industry knowledge, having spent many years working for most of the big players in the Chinese market.

“Countax has a very impressive design,” Liu said. “There is nothing else quite like it, and it suits the Chinese market very much. It has features that are not found on any other machines. The powered grass sweeper is creating a lot of interest among high-end landscapers and owners of soccer pitches.”

Recognizing that it is not intended for commercial use, Liu believes that the high-quality features of a Countax,
such as the reinforced fabricated cutting deck, steel body and cast front axle, lends itself to a life of very hard work.

“The market in China is both growing and evolving as customers recognize that owning quality equipment can actually reduce their costs overall,” Liu said. “The Countax tractor is well received because it is built so well.
We believe that we have the best product to take advantage of this growing trend, and the future looks very promising.”