It starts at 4:45 a.m. on a Monday. Groggy but eager volunteers congregate in the hotel lobby for a cup of coffee and a muffin before boarding buses to Arlington National Cemetery. Just as the sun breaks the horizon, volunteers and organizers exit the buses and file into seats for the “Renewal and Remembrance” welcome ceremony held at the Memorial Amphitheater, behind the Tomb of the Unknown Soldier. After a few words by event organizers and a keynote speech from a member of the U.S. Army, the mid-Atlantic region’s  July humidity has already peaked.

Volunteer groups climb back aboard the buses where they are transported to their work areas, which are pre-staged with materials and equipment. Team captains communicate assignments, sunscreen is applied, and engines are started. In the AriensCo volunteer section, stand-on aerators core through rows of headstones, while others keep lookout for utility vehicles delivering ice-cold water to hydrate the workers.

Of all the sights in Arlington that stir emotions, none are as mournful as seeing a live funeral procession and its horse-drawn caisson carry the casket of a deceased service member to their burial. As it approaches, the  rumble of power equipment falls silent and is replaced by the distant whine of cicadas that populate the  cemetery’s centuriesold trees. Just minutes later, they too are muffled by an honor guard’s 21-gun salute and the somber tone of taps. It’s a scene that powerfully illustrates the importance in expressing gratitude for the sacrifices of others. 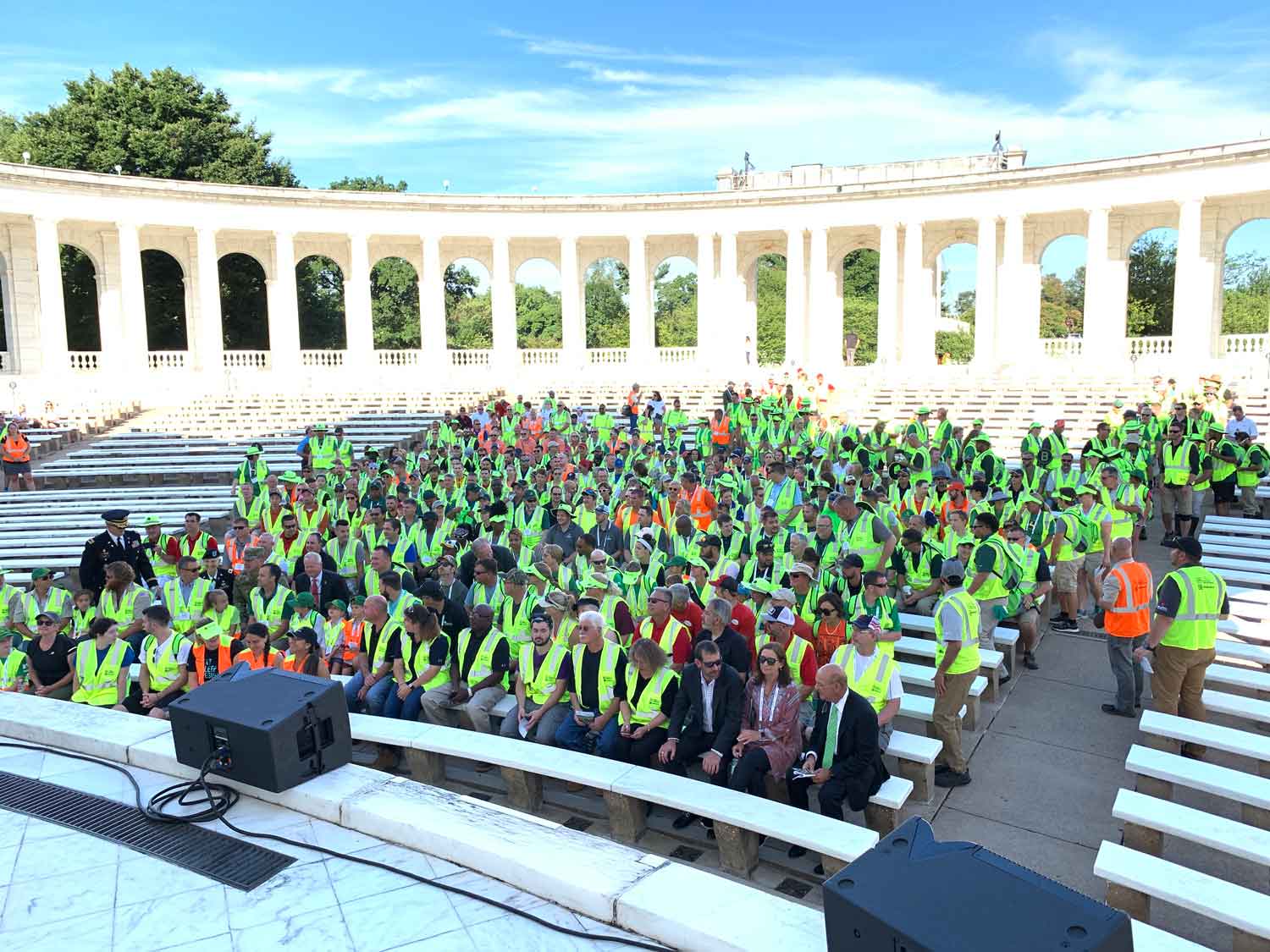 “Participation in Renewal and Remembrance, at every level, has been and continues to be one of the most  moving experiences of my career. I am humbled and honored to work side by side with the best our industry has to give back to those who have given all,” said John Eggleston, Renewal and Remembrance chair for the National Association of Landscape Professionals (NALP).

A Tradition of Volunteering

Before 1996, and before the National Association of Landscape Professionals was the NALP, commercial landscapers, equipment manufacturers and others in the landscaping industry made an annual trip to Washington D.C. for business meetings. Participation wasn’t particularly high, so the NALP developed a strategy to make the trip to the nation’s Capitol more enticing. Their plan added Renewal and Remembrance, a day of service dedicated to landscaping projects at Arlington National Cemetery. 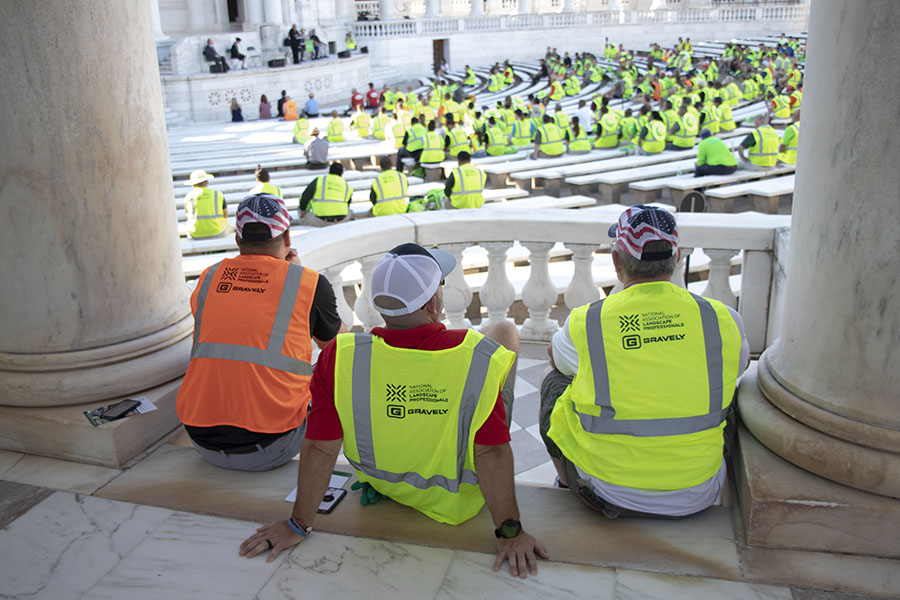 “This started as a green industry service project in conjunction with the Day on the Hill,” Eggleston said. “The early events were mostly turf projects — primarily spreading lime. Our children’s program has also been an integral part of the event from those early years.”

In the 23 years since, Renewal and Remembrance has completely transformed. What started with just a few members has grown exponentially, enabling the group to complete even more service projects.

“We’ve grown from a few dozen lawn care professionals to between 600 and 700 green industry pros from across the country, and we have added projects in irrigation, tree work, landscape and hardscape,” Eggleston said.

Though it’s just one day of service, the NALP’s Renewal and Remembrance Committee spends an entire year coordinating with the U.S. Army and event sponsors to organize all pieces of the production. This includes the opening ceremony, equipment deliveries, hotel room bookings, conference hall reservations, volunteer assignments, transportation, meals, security measures and more. It’s a lot of work, but the association and its partners have no intention of slowing down. 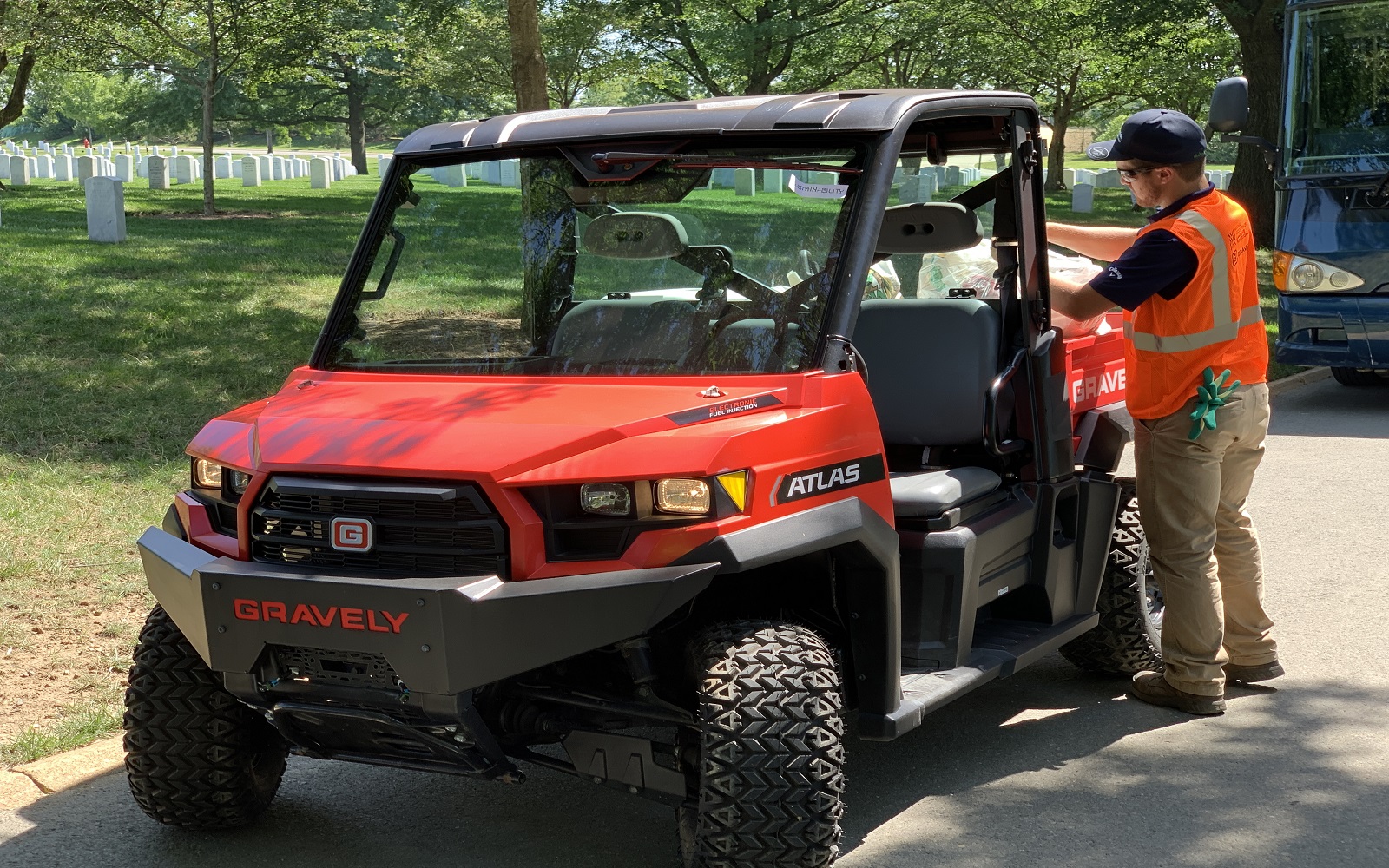 “We added sites, and now work with both the staff at Arlington National Cemetery and the National Park Service,” Eggleston said. “We’re in discussions with the Army and the NPS on potentially expanding our efforts to allow more industry members help maintain and beautify even more sites where our heroes rest.”

Perspective of a Congressman

Each Renewal and Remembrance event ends with a banquet, and this year, the NALP invited former U.S. Navy Seal and U.S. Rep. Mark Green, to close the evening. While the first part of Green’s account of the capture of Saddam Hussein was nothing short of captivating, the end of his speech won the audience’s attention.
Green told the group about a Facebook post he’d seen from a friend. It was a little girl visiting her soldier father’s grave. His narration, a true story, gave context to Arlington’s purpose in being more than a space to honor the memory of those who served, but to also provide a truly special place for the military families who share in the sacrifices made by their loved ones — a perspective that civilian families don’t always realize. It’s something Eggleston has learned in his many years of involvement with Renewal and Remembrance.

“To help make those hallowed acres beautiful and serene for those who lay there and their loved ones is, in my opinion, the very least we can do.”