Jeff Sebert worked diligently to scale the “one-man-with-a-mower" company he founded in 1985. After hours of door-knocking and thousands of neatly manicured lawns, he is now president of Sebert Landscape and Bluestem Ecological Services (Sebert Landscape) — a Top 50 commercial landscaping firm with a 75-acre nursery. The company has more than 450 employees at seven locations across Chicagoland and southern Wisconsin and has become a well-known fixture on the landscaping scene.

In 2021 Sebert Landscape began the switch to electric mowers and purchased 10 Gravely PRO-TURN EV zero-turn mowers. Three of his ground crews are using the mowers and they haven’t touched a filler cap or fuel canister in months — that is, other than refuelling the truck that takes them to job sites.

The goal of reducing the company’s fuel usage goes back to an epiphany Sebert had while building the company’s 30,000 ft2 headquarters that was certified LEED Gold by the U.S. Green Building Council in 2010.

The sustainability journey began right away as gas-powered handheld equipment was swapped out for  battery-powered options that could be recharged from the solar panels of the company’s specially designed  trailers. However, despite Sebert’s best intentions, propane remained the driving force behind Sebert  Landscape’s lawn mowers.

“I was always a little uncomfortable with battery-powered mowers because I didn’t think the technology worked for commercial equipment,” he explained. “Our teams run for long hours every day and don’t have time to change batteries that are hard-wired into the machine. But when I tested the Gravely PRO-TURN EV and saw how the machine performed and how easy it was to swap batteries, it was a game-changer. It aligns with our corporate values in terms of being sustainable, giving back and nurturing environmental stewardship.”

A CHANGE FOR THE BEST 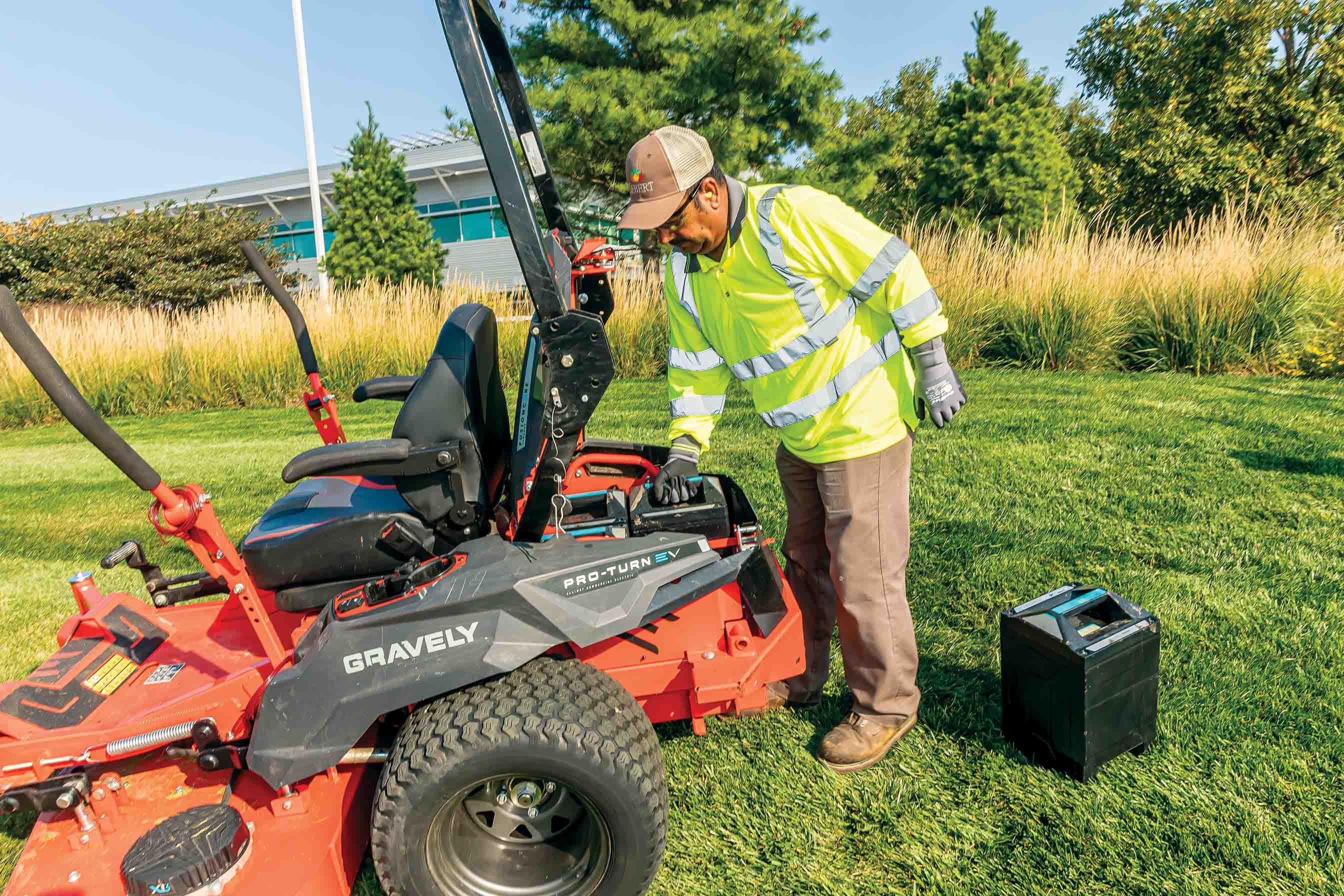 Recognizing that no contractor would accept a lawn mower that had to spend hours connected to a power  source as soon as it ran out of charge, the AriensCo engineers created QuickSwap, a system of compact,  portable and easily exchangeable 4 kWh lithium-ion batteries that operates on the same principle as inserting  a new set of rechargeable AA batteries into a remote-control toy car. Not only are they easy to swap and recharge, FusionCore batteries have enough power for the PRO-TURN EV to deliver performance equivalent to that of a commercial-grade gas model.

Unlike most remote-control toys, the PRO-TURN EV can run on just two or three of its four batteries when necessary. Thanks to a smart battery management system that automatically balances out the packs so all batteries operate at the maximum possible efficiency, two fully charged batteries can be safely combined with two that are approaching depletion.

After using the PRO-TURN EV for approximately five hours before replacements are needed, the batteries typically require 12 hours on charge (or only half that time with use of the optional fast-charging kit). Either way, it’s easy to see what swayed Sebert’s decision to go electric. Making such a big change to the tools that a business depends on is daunting, which is why the Gravely team immediately began working closely with Sebert Landscape to ensure a smooth transition — even before the new mowers had officially gone into production.

Amy Bateman, branch manager at Sebert Landscape in Bartlett, Illinois, elaborated:  “We made the trip to AriensCo’s factory in Brillion in March, took the tour, and actually saw the very first EV  mower go down the production line! It was reassuring to see the thought process that Gravely put into it all —  how no detail is overlooked and the precision with which everything is done “Dan Hayes [Francis Ariens Service School manager at AriensCo] helped us learn more about the machines  and showed us exactly how they work, which made our supervisors feel comfortable explaining the technology  to the crews that would be using them. It helped us move past that resistance you sometimes get when introducing something new and different.” 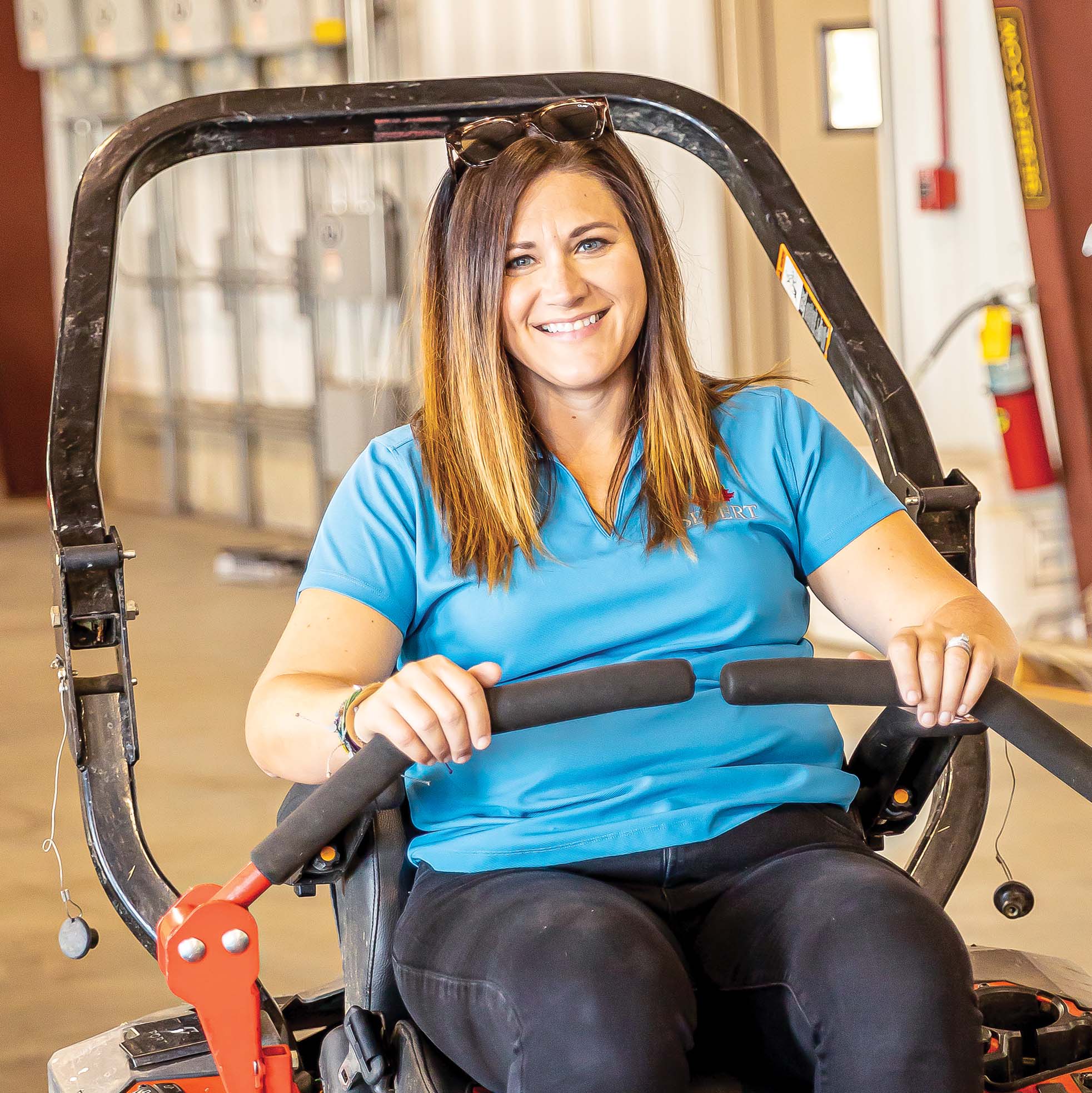 Once the 10 mowers were delivered, AriensCo provided training support and helped Sebert Landscape develop the infrastructure for recharging them.  “As soon as we rolled out the PRO-TURN EVs, Gravely and Halloran Equipment, our Gravely dealer and partner, came in and did a training day,” Bateman said. “They set up an obstacle course and showed how to change the blades, check for issues and charge the batteries. Afterwards, they sent the operators to cut the grass of a fire station across the street so they could get familiar with the machines and see how they’re different from a regular propane mower.”

By being able to ask the right questions and get feedback from the beginning — rather than developing bad habits that later needed to be corrected — Sebert Landscape crews hit the ground running, immediately becoming knowledgeable in the operation of the innovative machines. “

Our contact at Halloran was just here yesterday, along with three or four Gravely engineers. In fact, they’re frequently here and they’ve been an absolute asset to this entire process,” Bateman added. “If our crews raise any additional questions or issues, they’re always happy to go over them until we’re satisfied.”

In a short span of time, the crews acquired plenty of knowledge, such as understanding how differing grass lengths affect run time before they have to return to the trailer and change the batteries. While line trimmers, hedge trimmers and smaller 21” deck mowers can all be charged in the trailer, its solar panels do not produce enough energy to recharge FusionCore batteries. Being so powerful, they need to be connected to a charger in the shop or on a trailer overnight, then brought with them the next day.

Now, Sebert Landscape’s three all-electric crews — and the neighborhoods in which they work every day — are enjoying the benefits of Gravely’s quietest commercial mower. At just 84.2 dB of noise volume, the machine generates the equivalent volume of a kitchen blender. When the landscaping teams do attract bystander attention, it’s invariably of the positive kind.

“We do some village work and technically we’re not supposed to be out before 8 a.m., but in some areas, we’re able to be out a little bit earlier because the EVs are so quiet,” Bateman said. “People are interested — they’ll  say, ‘Wow, that machine doesn’t sound like it’s running!’ Or, ‘It’s really quiet! What kind of machine is that?’  It allows us to have those conversations about what we’re doing and why, and what Gravely has brought to the table in terms of commercial electric mowers.

“I think Sebert will continue to grow the EV side of our fleet; it should definitely be the next step that we take in  our sustainability plan here.”

And — somewhat ironically — with Serbert Landscape’s new, quiet electric machines already delivering such  spectacular results and environmental benefits, adding more of the same to its fleet could well ensure the company remains a “big noise” in the Chicagoland landscaping arena for years to come. 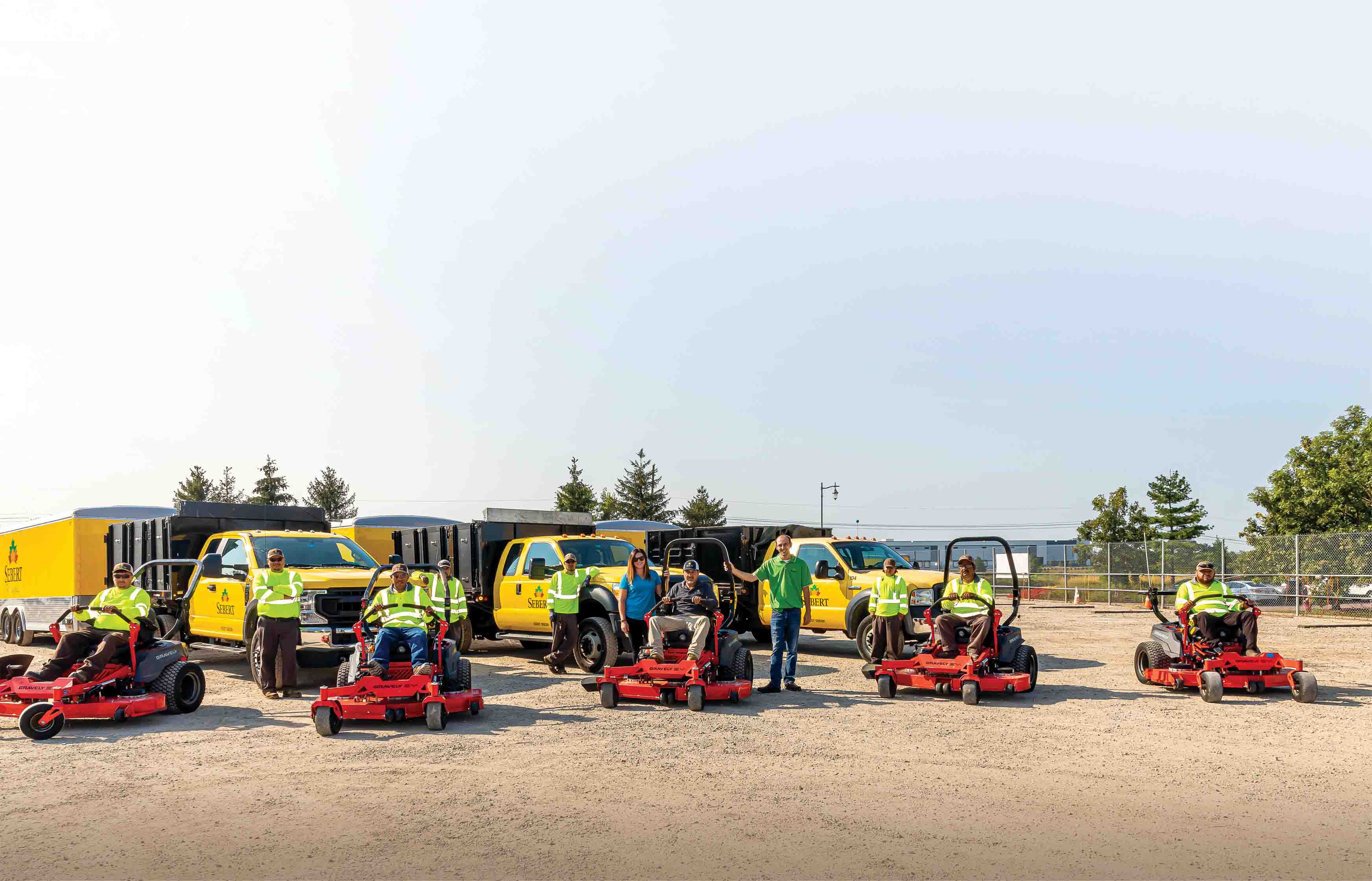 By Ricardo Rosa for Out Working